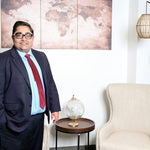 Nishit initially developed his love for the practice of Marital and Family law while working in the public sector. Within his first year of practice Mr. Patel was exposed to dozens of complex custody battles which he either successfully mediated or took to trial. Desiring to utilize his strong business acumen and understanding of complex financial matters he joined a boutique private firm and later successfully established his own firm, N.V.P. Law, P.A., in Sarasota, Florida representing a multitude of small businesses and business owners as they navigated their way through divorce and separation.

Nishit was born in London, England and immigrated to the United States with his family as a child. His family quickly became small business owners as franchisees while successfully owning and operating a multitude of other businesses in the hospitality, retail, and food industries. Using the financial mindset instilled in him as a child Nishit graduated from The University of Georgia with a degree in Accounting. Nishit briefly worked with a Metro-Atlanta accounting firm prior to entering law school at Barry University School of Law in Orlando, Florida where he graduated from in 2007. Throughout law school and into his legal career Nishit has found a great deal of satisfaction and value in community involvement and public service. He has been an active member of his local and state bar associations and was elected to represent and serve the 12th Judicial Circuit of Florida at the State level on the Board of Governors of the Young Lawyers Division of The Florida Bar.

Nishit is now the managing attorney with Atlanta Family Law Group. Nishit is ardent about providing compassionate service to each one of his clients and guiding them through their specific case paying particular attention to their individual needs. He also understands that not every divorce or family law case is identical and some situations may warrant more action. Using this as a guideline he devotes his years of knowledge and skills to aggressively representing his clients, their positions, and their needs.

Nishit's second passion is all things culinary. He adamantly enjoys the Atlanta food scene and loves to cook himself. He can also be found appreciating Atlanta's visual and performing arts including dance and theatre.

Thank you for contacting us. We will get back to you shortly.

Please complete all required fields below.